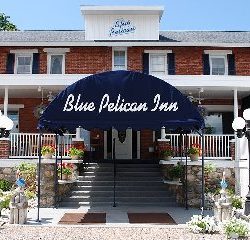 Our Mission Statement
Our mission is to provide the clients and customers of our Blue Pelican family of businesses with a positive and highly satisfying experience when they dine, stay overnight, shop, or Golf The Chief.

Blue Pelicans Early History
The Blue Pelican Inn has been known by many names. It was built in 1924 by Art Carpenter, Joe Blakely and Jack Garrison, all local stonemasons. It was owned by a stock company and the whole project was headed by Orrin (O.P.) Barber, with help from John Smith. It was named WE-GO-TA. Emmons (E.B.) Gill lived in the hotel and ran it. The bar and dining room were at the north end of the hotel with a total of 22 rooms and only 4 bathrooms. For years it was a favorite location for traveling salesmen. At some time during this period, the name was changed to the Central Lake Hotel. Several years later, Cliff and Etta Springstead sold their Central Lake tavern and purchased the Central Lake Hotel. In April of 1946, Charles A. (Art) Cronover and his wife Ruth, and Archie S. Dayton purchased the hotel. The rooms with baths were rented for $4.50 per night and without a bath, they were $2.50.Someone always met passengers at the train station who were wishing to stay at the hotel. In the mid-1960s, Gary Morse purchased the hotel and changed the name to The Palace. Morse moved the bar to the south end of the hotel and totally remodeled it. The second floor was renovated to include living quarters for the family and the Brownwood offices. The Palace was also the scene of a gala New Year’s Eve party for many years. In the mid-seventies, Doug and Mary Lou Denny purchased The Palace and changed the name to The Lamplight Inn. The menu featured steaks, seafood, and prime rib specials. The overnight guests utilized the upstairs bedrooms for a bed and breakfast. In 1986, Ted and Betty Strezempek bought the Lamplight Inn along with their sons Tracy and Scott. They improved on the fine dining. In 1996, the Inn was sold to Mike and Mary Ellen Murphy. They moved their family from Dearborn, Michigan and changed the name to Murphys Lamplight Inn. Chris and Merrie Corbett purchased the Lamplight Inn property from the Murphys in October 2008 and changed the name to The Blue Pelican Inn. The Corbetts added additions of a new kitchen and a covered porch to the building. The seven hotel rooms, as well as the bar and the main dining room, were totally remodeled. Also, the Side Door Saloon was remodeled and reopened. The bedrooms are now being rented.

The Legend of the Blue Pelican
About 18,000 years ago, when the last glaciers invaded this area from the north, creatures of every type were living here and enjoying life in beautiful Northern Michigan. However, as the extreme cold persisted and dropped the thermometer well below the zero degree temperature level, a multitude of the creatures either migrated south (quite possibly to the Florida area) or actually became extinct. A very small, yet hardy, group remained able to withstand the cold of Michigan winters and refused to leave their homes, friends and families. One of the few remaining was a solitary pelican who struggled with the decision of Packing and Leaving or whether he should hunker down and battle the elements. This pelican decided that Northern Michigan was his home and that he would indeed stay. Observers report that during the first winter the temperatures were so cold that the pelicans feathers actually turned blue. Today, on the shores of Torch Lake, residents regularly report seeing the silhouette of a very cold and lonely BLUE PELICAN silently gliding above the surface of the lake.